TV shows that are ace

There must be more to life than football?
Post Reply
596 posts

I don't want to break it to you - but there is this whole 'War' genre of film that you might want to avoid.

Uh huh. Hey if you like Star Wars, you should check out Schindler's List, makes the Holocaust totally worth it... said nobody ever. Chernobyl is well made, it's telling an important story and it should remind people of lessons that are being forgotten as time passes. But it's not escapism or entertainment. You obviously disagree, but I think the distinction is important.
Top

So you don't think "Hooray for Chernobyl" is a rather crass choice of words? I don't think for one second that Jim was celebrating the disaster for inspiring something worth watching on TV. But it can't possibly be something you enjoy watching? Certainly not like some made up tale where you know the good guys will eventually beat the bad guys. Perhaps it's just not close enough to home, a docudrama about Grenfell Tower or the Manchester Arena bombing would make the difference more stark.
Top

mcteeth wrote: ↑
Wed May 22, 2019 1:12 pm
Internet hysteria to one side both season 7 and season 8 have been pretty poor considering seasons 1 to 6. It seem pretty evident that with no books to follow anymore the writers struggled to maintain the level of plot development.

I don't have a particular issue with the ending or particular elements of what has happened in terms of the story, it's just been quite poorly executed with too many floor and holes in the story they're telling. I'd go as far as saying season 8 was also pretty badly acted too.

Some of the scenes towards the end were laughably bad considering the standards once set.

Chernobyl has been a far better watch in recent weeks as Thrones finally petered out.

The continuity has been utterly awful.
Top

Yeah it's just been quite shit.
Top

Looking at this (spoilers if you haven't seen it) it appears they have put a lot of effort into making parallels with previous events and episodes (some of which I got, some I totally missed), and possibly tried to cram them in while letting the storyline suffer and basic continuity go totally out the window.

To me, as RTT said above, the whole series felt rushed. They had the ending in mind, and episodes 1-5 were just a means of getting there. We've had senseless, random deaths, plot lines coming to an abrupt end, and other questions that remain unanswered. (re Episode 3... a very abrupt ending to a storyline that could have been concluded over 2 or 3 episodes rather than a few minutes, which made the intense build up seem a bit pointless)
Top 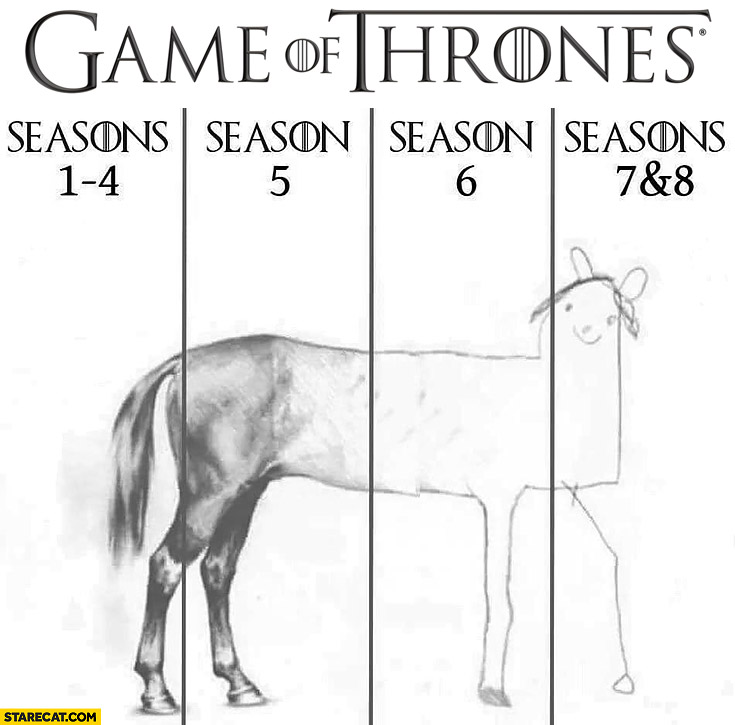 old as the hills (relatively) but sums it up nicely
Top

I actually quite liked the seventh series.

Huge parts of the 3rd to 6th series were dull as shit and only redeemed by a few sparkling characters.

******SPOILERS*******
The entire high sparrow shit was just annoying as hell, Jon's journey north of the wall was mostly boring, Jaime Lannister and Bronn going to Dorne was a huge anti climax, and the Dothraki were largely irrelevant. Meereen and the Sons of the Harpy also got really boring.
Top

I am going to miss GOT. I'm not too enthralled that HBO want to go backwards in time for the new series codenamed bloodmoon. It would be much better to follow Arya and go West of Westeros. Chernobyl looked good on the trailer and has not disappointed and its a really accurate account of what you imagined it to be like. The Russian fire brigade looked kitted out not too dissimilar to the Trumpton fire Brigade and that poorly equipped they would struggle to get a cat out of a tree. Poor brave men didn't stand a chance. Also recently seen a trailer for he new Star Trek series with Patrick Stewart and obviously named Picard. Can't be any worse than Discovery.
Top
Post Reply
596 posts

Return to “The Other Things in Life”